Long time celebrated artist, singer, and musician is again on tour with her band Heart. The tour is accompanied by the famous rock band Styx. The classic rock band famous for their powerful music of guitar and piano is going to celebrate their golden jubilee.

These legendary bands have come together to perform the one-of-a-kind tour, and fans are very excited about that. Styx produced 17 albums in their career that is half a century-long, with their latest album, Crash of the Crown, released in 2021. The band has produced some of the greatest hits, such as Mr. Roboto, Come Sail Away, Babe, Too Much Time on My Hands, Show Me the Way, etc.

The tour is planned in Canada and will entertain the crowd of 9 cities in their 11 concerts spread between October 5th, 2022, and October 18th, 2022. The collaborative tour will visit the cities of Victoria, Abbotsford, Kelowna, Calgary, Edmonton, Lethbridge, Saskatoon, Regina, and Winnipeg.

In this tour, Nancy is not accompanied by her sister Ann Wilson in the tour; instead, her vocal duties of Ann are passed to Kimberly Nichole. She has clarified that the main cause of Ann’s decision was that she does not want to tour anymore.

Wilson also added that there is no comparison between Ann Wilson and Kimberly Nichole, and both the superstars have their unique capabilities. She also added that the fans would hear the wholly different and unique style of heart song in their upcoming concerts. Get Cheapest Tickets From Here

The tour’s lineup is the Styx band with Lawrence Gowan, JY Young, Tommy Shaw, Chuck Panozzo, Todd Sucherman, and Ricky Phillips, who Nancy Wilson and Kimberly Nichole accompany, and this is going to be one of the best historical tours in Canada.

The heart band was formed in 1967, and to date, it has sold over 35 million albums worldwide and has some of the most iconic songs such as Magic Man, Barracuda, Crazy on You, Never, What About Love, and Alone. Nancy also released her latest solo album, You and Me, in which she plays the guitar and sings all the songs all by herself.

The ticket sale is scheduled to start on Friday, April 1st, from 10 am local time on all the leading platforms, including Ticketmaster. There are presales offers for the members of the Styx fan club that are offering VIP packages at their own platform StyxWorld.com which has already started on Tuesday, March 29th from 10 am. American Express cardholders can also enjoy the presale offer that will start on Wednesday, March 30th at 10 am local time.

The price of the tickets starts from just $45, and it is nothing compared to the entertainment they are going to be providing. Several VIP packages are available for the die-hard fans that include premium features such as early entry into the concert venue, VIP seating near the front rows, access to the soundcheck party, meet and greet with the artist, photography session, and much more. Due to the risk of the covid 19, precautionary policies are devised that include proof of vaccination or a covid negative report at the time of entry. There are also policies regarding the bag, and only see-through bags are allowed so that the authorities would not have to touch them to see what is inside. For more details about the policy, visit their official website. Buy Tickets From Here

After the loss of Taylor Hawkins, the Foo Fighters have canceled a show in Salt Lake City as well as additional plans 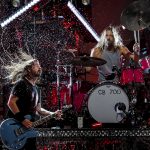