One of the leading artists in country music, Lee Brice, who was also nominated for Grammy Awards, has announced his new tour spread across 20 cities in the United States. The tour is named the Label Me Proud Tour and is produced by the live nation. The tour will begin in June and will end in late September. This tour will witness the first-time live performance of  Lee Brice’s recently released single “soul,” which has made several records and it is Brice’s fourth consecutive number hit. It has made its way into the Top 30 on Mediabase’s country chart.Thus fans are very excited to see their favourite artist doing what he does best—throwing one party. Buy Tickets From Here

Michael Ray is also accompanying him on tour, and together, they will march the whole nation. Jackson Dean will also be joining them; Tyler Farr and Tim Montana will also participate as guest performers in one show of DC scheduled in July.

Brice said in his tour announcement that “Man, it feels good to announce this tour!” He also added, It’s been a while since we’ve all been back out on the road and to have my good buddies, Michael Ray and Jackson Dean, he considers the companionship of his friends a blessing.

The last album of Lee Bric was released in November of 2020; the album “Hey world” gathered colossal support and reached 45th position on US Billboard 200. It also secured 8th position on US Top Country Albums Billboard.

Since then, Lee Brice has been the dream singer of fans.He has released three singles, all of them have secured hit records. The songs “I Hope You’re Happy Now,” “One of Them Girls,”  have increased his score of impressive number 1 single songs to 9. He has excellent skills   like talent for storytelling and giving life to the music.That living magic can be noticed with perfection in his historical track “One of Them Girls,” .He also secured to win 2021 ASCAP, BMI, and SESAC Awards in the category of “Country Song of The Year” due to this song. This is the first time that a song has taken three of these awards in the same year and the same category. Get Cheapest Tickets From Here

The ticket for the Lee Brice tour is already on sale from 1st April 2022, at 10 am local time. Pre-sale offers for the Label Me Proud Tour are open on March 29th at 10 am local time. The tour will start from Hampton Beach, NH, on June 2nd and end on September 24th in Sugar Land, TX.The minimum price of the ticket is set at around $49 which is quite reasonable.

Hence Brice out on the road this summer with his good friend and artist, Michael Ray, who is coming off with his RIAA Platinum-certified multi-week No. 1, “Whiskey and Rain,” and whose current single “Holy Water” continues to climb the country charts. Another big machine recording artist Jackson Dean,joining Brice at tour whose stomping first single at Country radio, “Don’t Come Looking,” is making a massive impact on the rising country star. Moreover Tyler Farr and Tim Montana will also be making appearances during the Label Me Proud Tour on selected dates. You can see the tour schedule for additional information on each date’s supporting acts.

Pre-sale tickets for the Label Me Proud Tour, including special VIP experience packages where fans will have the chance to meet Brice and Ray, are available through Lee Brice’s fan club on Tuesday, March 29th at 10:00 am (local time). Buy Tickets From Here

The Eagles Have Announced Spring 2022 Tour Dates, Performing ‘Hotel California’ in Its Entirety 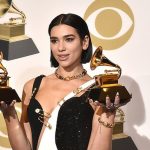